Nida Lighthouse has had two lives: the first lasted from its construction in 1874 until the end of the Second World War, and the second began during the Soviet era, in 1953, with the construction of the 29-metre-high lighthouse that still stands today.

At the birth of the lighthouse, the hill Urbas was a bare, spectacular 51 meter-high sand dune, and around 1870, the dune re-forestation works were just starting here.  During those times, the Nida Lighthouse became a symbol of man’s victory over the element of sand. It was quite some challenge to build a 27 metre-high structure on a sandy hill, which is why the foundation of the lighthouse was made of broken stone blocks, which were sunk to a depth of three metres. It stood well for 70 years, and would have stood longer if it, as a strategic facility, had not been deliberately blown up by the retreating German army at the end of the Second World War.

When we talk about the old Nida Lighthouse, it performed another important function: it not only showed the way for the ships, but also warned of approaching storms. Around the end of the 19th century, the “side antennas” appeared in the upper part of the Nida Lighthouse. This was a structure that allowed the lighthouse keeper to post the appropriate signals – flags – on the them when he received a telegraphic message about the approaching storm. Because of these “antennas”, the fishermen of the Curonian Lagoon affectionately called it the lighthouse with wings.

Surrounded by wild roses, the octagonal red-brick building was much loved by the residents and holidaymakers alike, it was featured on postcards of the time, and even acquired a “human” name: between the two world wars, the people from Germany, Konigsberg, and Tilsit referred to the Lighthouse in Nida as the “Red Christopher”.

The first life of Nida Lighthouse ended in an abrupt and dramatic by the end of 1944, however, by 1945 the light started to shine from the hill Urbas again. Of course, it was a temporary lighthouse, however, it just proves how important Nida Lighthouses were for the marine navigation! 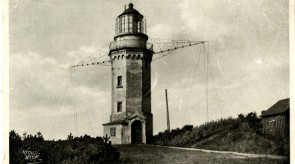 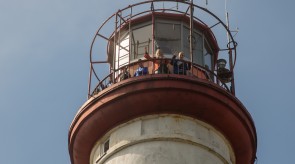 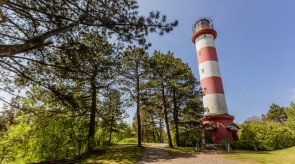