One of the most visited tourist attractions in Neringa!

The Hill of Witches is a unique museum of wooden sculptures, where devils, witches and other characters of folklore reign supreme, revealing to visitors the natural and mystical spirit of the place.

Most of the sculptures of the Hill of Witches are placed around the scenic Fir Valley (German Tannental). Since the late 19th century, this valley, which is a natural amphitheatre of the forest formed by parabolic dunes, and the Hill of Eve used to attract crowds (up to a thousand people) of Lithuanians from the other side of the lagoon on Midsummer Day to pray in the mystical atmosphere and visit the popular resort of Juodkrantė. This tradition was particularly popular before the First World War, but also continued in the interwar period.

Assembled from all over Lithuania in 1979, the authors of sculptures of the Hill of Witches, wood carvers and blacksmiths, were inspired by the beauty of the landscape and mystical atmosphere of the parabolic dune slopes overgrown with centenary pine and fir trees that gave an impetus to embody the characters of fairy tales and legends in wood. During the first creative workshop, folk artists made 25 sculptures and dedicated the set to the International Year of the Child (1979), while 50 wood carvers and blacksmiths created another 71 sculptures in the course of three folk artist workshops that spanned from 1979 to 1981. The project was led by sculptor Steponas Šarapovas and architect Algimantas Nasvytis.

The ensemble of the Hill of Witches, which has delighted and mystified visitors to Neringa for four decades, has been amplified and renewed on a regular basis: in 1988, 12 playful sculptures were created, and in 1999, the restoration of sculptures that had survived several decades was started. In 2002, part of the sculptures that succumbed to a humid climate were replaced with new ones, and annually held woodcarving symposia offer a possibility to renovate the most damaged sculptures.

Today, the exposition of wooden sculptures on the Hill of Witches in Juodkrantė is among the most visited tourist attractions in Neringa. 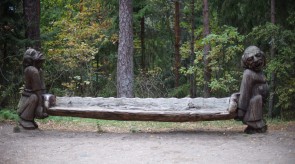 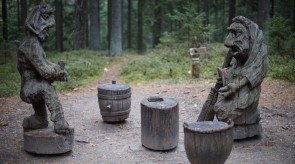 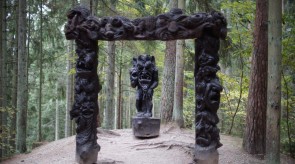 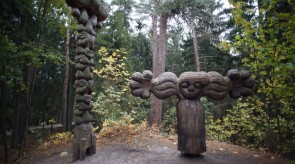 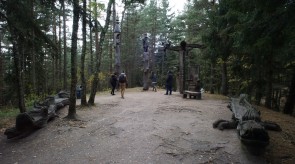 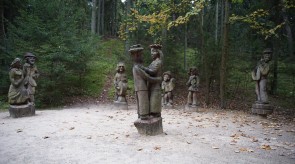 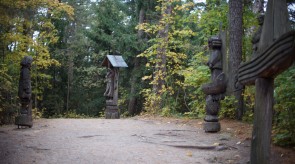 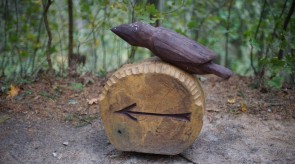